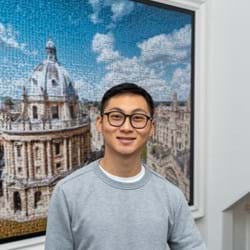 Wenye joined Oxford Robotics Institute in 2019 as a DPhil student, under the supervision of Prof. Perla Maiolino in the Soft Robotics Lab. He is a member of Mansfield College. He obtained his BEng degree in Mechanical Engineering from the University of Sheffield, then completed his MSc degree in Robotics at the University of Bristol. He was introduced to the field of soft robotics by Prof. Jonathan Rossiter. Supervised by Prof. Jonathan Rossiter, Wenye developed a fingernail sensor to measure the fingertip touch force with an RGB sensor, as a part of his Master’s degree. During his time in Bristol, he also conducted an Asch experiment to investigate whether humanoid robots eg. NAOs can exert social pressure on adults.

His current research interests include soft robotics and human-robot interaction. He is keen on developing soft robotic devices for assistance and rehabilitation.

Outside of academia, he enjoys training in Brazilian jiu-jitsu and loves to invite friends to join him.