The CERBERUS team (CollaborativE walking & flying RoBots for autonomous ExploRation in Underground Settings) is competing in the ongoing DARPA Subterranean (SubT) Challenge. The SubT Challenge plans to develop novel approaches to rapidly map, explore and search underground environments in time-sensitive operations critical for to aid the first responders and rescue personnel of the future. TEAM CERBERUS is led by Prof. Kostas Alexis of University of Nevada, Reno and includes ETH Zurich (RSL and ASL), Sierra Nevada Corporation, University of California, Berkeley, and Flyability as well as researchers from ORI’s Dynamic Robot Systems Group.

What is the Challenge? The SubT Challenge has a very challenging goal – start outside an unexplored underground facility and then in one hour explore and map it while also identifying and locating artifacts (e.g. fire hydrants, manikins, equipment) to score points – with as many robots as you would like. It’s like a big treasure hunt – except in dark, unknown, muddy, dusty and dirty labyrinths. Oh, and you can’t communicate with the robots easily because there is no WiFi or GPS.

Dynamic Robot Systems testing our robots in a mine (Mar 2020)

What is our approach? Our team is using walking robots (ANYmals) and flying robots (from Reno, ASL and Flyability). The challenge requires accurate mapping, advances in robot locomotion and a solution tfor adhoc communications between the robots and the single human operator.

What is Oxford contributing? We joined Team Cerberus mid-competition and bring expertise in field robot navigation such as multi-sensor odometry and SLAM. We are preparing our new ANYmal C quadruped as well as wheeled robots for the challenge.

When is the competition? The competition began in 2018. Intermediate competitions are held every six months – with cave, mine (near Pittsburgh) and urban circuits (near Seattle). The finals will be held in Autumn 2021 for multi-million dollar prizes. 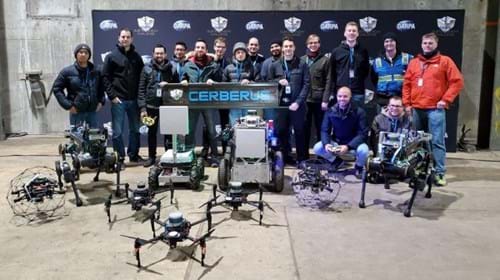